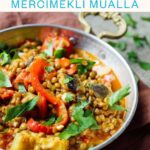 Simple to make, delicious and naturally vegan. This Turkish lentil stew with aubergine, peppers & tomato is full of summery flavours! Make this for a light summer meal, as a side to a simple fried or roasted fish, or as one of several dishes, meze style.

Admission: I’ve never had this dish served to me by a Turk. I’ve never seen it in a restaurant menu.

I found it before it found me.

Mercimekli mualla, or mualla with lentils, is a dish from South-Eastern Turkey. I first became aware of it from Özlem’s Turkish Table, a wonderful blog of Turkish cookery which has also spawned a cookbook. I’ve not looked back since.

This summery lentil stew is part of a huge array of Turkish olive oil based dishes. The basic idea is to bring out the best of the season’s vegetables by cooking them soft in copious amounts of olive oil.

I’ve long been familiar with the concept, of course. It is integral to Turkish cooking, and some of my favourite Turkish dishes are prepared in this way. Runner beans, borlotti beans, stuffed vegetables – they’re all at their best after a long, slow braise in olive oil, onion, garlic and a little tomato.

Although the cuisine is ripe with vegetarian and vegan dishes such as these olive oil based ones, the concept of vegetarianism, let alone veganism, remains novel in Turkey.

Vegetarian friends will introduce themselves as such at restaurants, to which the waiters will excitedly say “of course we have lots of delicious vegetarian food”. A few minutes later, a lentil soup (made with chicken stock) and beans in tomato sauce with small pieces of meat in it, may appear.

This may sound silly to a Westerner, where vegetarianism has gone more or less mainstream. Most people know what that entails.

In Turkey, however, people have always eaten a lot of vegetables. Meat is often used for flavouring rather than as a main ingredient. One of my Turkish cookbooks includes a chapter of vegetable dishes. The first three are mixed vegetable casserole with chicken, artichokes with lamb and celeriac with lamb in lemon sauce.

Still, the cuisines of Turkey and the Middle East are a great place to start if you want to eat less meat, or even go vegan. There’s a plethora of legume and vegetable based dishes to choose from, completely free of meat or animal products.

No need to re-invent the wheel, right?

And, personally, I much prefer naturally vegan food to any meat substitutes, which are often highly processed, expensive and disappointing in flavour.

Mercimekli mualla is a naturally vegan lentil stew from south-Eastern Turkey. The dish itself as simple and delicious as they come.

At the core of this version, which I’ve followed Özlem’s lead in preparing, is the holy trinity of aubergine, tomato and peppers. I truly believe any recipe which starts with these three ingredients, and doesn’t venture too much into other exotic ingredients, is going to be a good one.

Green lentils add wholesomeness and flavour. I often use brown or black lentils, such as Puy or Beluga lentils. They hold their shape better during cooking. That makes them great for salads, but they also work very well here. They certainly look prettier too. Use what you have at hand.

Cumin seeds add a soft earthiness that further enhance the flavour of the lentils. This may not be traditional, but South Eastern Turkish cuisine does lean more heavily on spices than, say, its Aegean counterpart. The cumin gives me the scents of the narrow, windy spice markets that are so symbolic of the Eastern Mediterranean.

This lentil stew is very forgiving, and can be served warm, or at room temperature. It also keeps well in the fridge for a few days. I often make this as a main course, served warm with a salad and some yoghurt (use a vegan one, if you like) or fried halloumi.

The next day, I have any leftovers for lunch as they are – warmed up just enough to come to room temperature. Or for dinner, as a side to fish. It also works as one of several dishes, meze style.

The recipe serves 2-3 as a main course, more if serving as a side dish or meze style. 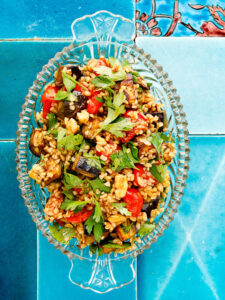 Get delicious recipes &
fascinating stories
from
the heart of Istanbul
in my fortnightly newsletter.