The tricks you need for making perfectly smooth and creamy hummus – every time!
Vidar Bergum
Jump to Recipe

Making perfect creamy hummus like the ones you get in the backstreets of Beirut or Jerusalem couldn’t be easier. Here are all the tricks you need to make delicious hummus – every single time!

– You made hummus from canned chickpeas?!

My friend’s tone of voice was unmistakable. Shock, horror, disbelief. Apparently, not the way to do it.

Don’t get me wrong. My friend isn’t usually disparaging about others’ efforts in food making. In fact, she’s quite the opposite. The directness of the remark, from one Israeli to another at a student pot luck party, startled me.

The hummus was actually pretty good, as acknowledged by all. But perhaps more importantly, for me at least, it gave me my first taste of the importance of this humble dish to anyone with a connection to the Middle East.

Hummus is the dish everyone wants to own.

The debated origins of hummus

The truth of the matter is, we don’t know who first invented hummus.

The word, simply Arabic for chickpeas, doesn’t really give any clues. Given the obviousness of crushing cooked chickpeas, it’s not hard to imagine the dish being discovered, independently, in multiple places.

The version which has become a global phenomenon, is humus tehina. Here, more or less generous amounts of tahini infinitely improves the flavour and texture of the mashed chickpeas.

This version is apparently first mentioned in a 13th century Arabic cookbook. Seven centuries later, it was popularised worldwide through diasporas and Claudia Roden’s standard setting cookbok The Book of Middle Eastern Cooking, first published in 1968.

Today, adding tahini is so common, most of us can hardly imagine hummus without.

The secret to perfect hummus

Years later, after making (and eating) amounts of hummus that would earn the respect of any Middle Easterner, I’m clearly and confidently on the side of my surprised friend. If all I have is tinned chickpeas, I’d rather fry them up with some spices. Hummus I make not. For that, canned chickpeas are either too hard, too salty, or taste too much of its brine.

I always make hummus from dried chickpeas that I cook until near falling-apart tender. A little bicarbonate of soda (baking soda) is helpful to nudge the chickpeas along (alkaline water softens legumes more quickly). Otherwise, as with most legumes, patience also does the trick.

The other key to great hummus can be found in its second key ingredient. Tahini. It needs to be the best quality you can find and afford. And you need lots of it.

A good tahini is smooth and delicious even when eaten raw. Lesser versions are often claggy, with a slightly bitter or rancid aftertaste. In my experience they also tend to separate more easily, but this is purely anecdotal. And eventually all tahini will separate into three distinct layers: oil at the top, sediment at the bottom, and a thin sauce covering the in-between.

It is also my experience – as so many others also note – that Arab brands are generally far superior to Western ones. This includes Cypriot or Turkish ones – some of the stuff passing as tahini in Turkish supermarkets is barely edible.

So if you’re looking at an aisle of tahini and unsure which one to choose, go with one with Arabic script on it. If you live somewhere with a wide range of options when it comes to tahini: Seek out smaller scale producers. They are invariably better. As a bonus, you often get to support a family-owned business who cares a lot about the produce they make and the surroundings in which they are made at the same time.

In Turkey, my go-to brands for tahini are Altan Manisalı, an Izmir-based family-owned producer, and Beşe 1885, which is more widely available and also has an excellent, stronger-flavoured version with double roasted sesame seeds. The latter is not to be confused with dark tahini from unhulled sesame seeds, which in my mind should be avoided at all costs. Especially if making hummus.

Some people also like to peel the chickpeas, one by one. It is true that it makes the hummus even smoother. But since I’ve already got a super-smooth and creamy hummus using the tricks above, I find the extra labour isn’t worth it. You can still get an incredibly smooth and fluffy hummus without individually peeling hundreds of tiny chickpeas.

How to serve hummus

Variations including roast peppers, beetroot or other vegetables mashed with the chickpeas abound these days. Personally, I prefer my hummus as is, with good quality extra virgin olive oil and some paprika sprinkled on top. (In case you were in the dark until now: never put olive oil into the hummus itself – the tahini gives plenty enough fat and flavour.)

Some fresh pita or sourdough bread on the side, and I’m a very happy man indeed.

Occasionally, I’ll make more of a meal out of it. I love it topped with spiced minced meat, preferably lamb, and herbs.

The recipe that follows is the way I’ve been making hummus for years. Occasionally, I’ll try recipes with a slightly different method, but I always come back to this one. It strikes the perfect balance between simplicity, creaminess and full-on perfect flavour.

It’s a hummus I am more than happy to proudly serve even the most hummus loving of my friends, whether from the Middle East or elsewhere. It’s by far the most popular recipe on my Norwegian language blog, where dozens of people search specifically for that recipe every single day.

This post was first published in October 2016, but substantially reworked and republished in September 2020 following the relaunch of this website earlier that year. The recipe remains unchanged. 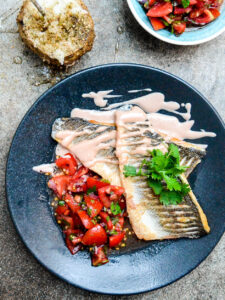