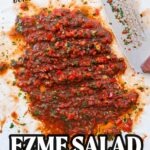 This dip salad is many people’s first encounter with Turkish food, alongside a basket of warm bread. But what’s in it? Here’s how to make a fresh and spicy Turkish ezme salad, the perfect appetiser for any meal.

If you’ve ever been to Turkey, chances are you’ve eaten acılı ezme. Perhaps it was even your first taste of Turkish cuisine.

This little salad is often served at restaurants alongside the basket of Turkish bread that appears virtually the second you sit down. Somewhere between a finely chopped salad and a dip, it’s surely made many wonder what it might be.

And, perhaps more importantly, how spicy this might be.

People not familiar with Turkish cuisine seem to think it’s spicy, full of spices – or even both. This is far from the case. On the contrary, Turkish food is generally characterised by clean flavours and very little heat.

As with anything, there are exceptions.

Acılı is the Turkish word for spicy. This little bowl of finely chopped vegetables might look inconspicuous. But if prepared properly, acili ezme is a sort of Turkish chilli salsa. It certainly packs a punch!

And as for ezme? It’s the Turkish word for crushed, referring to the style of preparation. Indeed, you’ll find several other ezme dishes in Turkish cuisine, all of them being crushed, dip-like in texture.

Where does the heat in acili ezme come from?

The heat in ezme salad usually comes from one of two sources.

My preferred way is using the dried chili flakes known as pul biber, also known as Aleppo pepper. These are usually fairly mild and very fragrant, almost like paprika flakes. That said, if you head to the spice market, there’s a huge variety of pul biber available, from the very mild to the super spicy.

If you’ve got access to it, use a fairly spicy version when making this salad. Or you can, as I’ve suggested in the ezme recipe below, use a combination of fresh chilies and a regular heat pul biber.

Another option, more common in the Southeast, is using Turkish hot pepper paste. You’ll find it in my international grocers, labelled with its Turkish name acı biber salçası. Using this adds a beautiful umami laden heat.

Personally, I prefer the cleaner and fresher flavour of the fresh vegetables and pul biber.

How to make ezme salad

As with all salads based on fresh vegetables, Turkish ezme salad is best freshly chopped, using vegetables in season. As such, this salad is best served during the summer months or early autumn, when tomatoes are full of flavour.

Of the ingredients, the most important is to make sure that your tomatoes are red, sun ripened and full of flavour. At the peak of summer, you can use any tomato for this salad. Smaller cherry or plum tomatoes are a safer choice in the weeks before and after.

If your tomatoes aren’t quite at peak flavour yet, or you just would like an extra umami punch, you can add 1-2 tsp best quality tomato paste to the salad. Again, I personally prefer the cleaner and fresher flavours of the fresh vegetables here, but sometimes your tomatoes will need a little bit of help.

As mentioned above, unless you can get hold of a very spicy pul biber, I recommend using both fresh and dried chillies in this recipe. As always with chilies, whether fresh or dry, keep in mind that they can vary significantly in heat! Adapt the amounts to the ingredients you have at hand and your own tastebuds.

Another thing to note: There isn’t a definite recipe for ezme salad. Each cook has his or her own preferences, and it can easily be varied according to what you’ve got at hand or feel like on that particular day.

My version is fresh and simple, others like to add a greater variation of vegetables or spices. Consider the recipe below a delicious starting point rather than a blueprint to be followed to a tee.

How to serve Turkish ezme salad

In Turkey, you’ll find ezme primarily in kebab restaurants. Here, it’s usually served as an appetiser alongside fresh bread or as a side dish to kebabs. Many other restaurants, particularly those geared towards tourists, have also taken to serving a small bowl of acili ezme as guests sit down at the table.

The salad can also be served as a meze. It also works well along any grilled meat (not just kebabs).

Whichever way you serve it, make sure there’s plenty of delicious fresh bread, such as Turkish pide bread, alongside to mop up all those delicious juices.

I always recommend making chopped vegetable salads just before serving. Once chopped, fresh vegetables quickly lose their crispness. Since ezme is so finely chopped as to nearly resemble a dip, it can be made a few hours ahead in a pinch. But the best restaurants always chop it to order for a reason.