Oh, that dressing! The perfect match for earthy bulgur and roast summer vegetables.

Advertising disclosure: This website is partly funded by affiliate links, meaning I may earn a small commission from purchases made after clicking links on this page.

When I have leftover bulgur, I make bulgur salad. And of the countless versions I’ve made over the years, this remains my favourite. Simple, light – and absolutely delicious, courtesy of a perfectly spiced dressing. Try this bulgur salad with roast tomato & aubergine for lunch or even a light dinner.

I often make bulgur, the cracked wheat so popular in Turkey, alongside dinner. It works well with most of the food that I cook, and is more flavourful, nutritious and even easier to cook than rice.

This also means I often have leftover bulgur. Often not enough to be reheated for another dinner. Ever had that problem?

Good thing cooked bulgur is a perfect base for a salad.

For this one, I simply roast an aubergine and a few tomatoes until the flavour has concentrated and the veggies gone a comfortable soft.

A few walnuts add som crunch, a bit of parsley some colour and freshness.

And then, the world’s best dressing to bring it all together. A simple sweet and sour dressing made from pomegranate juice with a hint of cinnamon. Happiness!

Bulgur is made from durum wheat which has been boiled, dried and crushed. There are two basic varieties: Coarse and fine.

Coarse bulgur (pilavlik in Turkish) is roughly the size of a rice grain and is often a good substitute for both rice and couscous. Fine bulgur (köftelik in Turkish) is much finer and is used for kibbeh and içli köfte, the deep fried stuffed bulgur wheat balls so popular in Lebanon and Turkey, and finer salads such as tabbouleh.

For this salad, I use coarse bulgur but if it’s hard to find where you live a large-ish variety of couscous would also work well.

How to flavour bulgur salad with roast tomato

The pomegranate molasses is crucial for the flavour of this bulgur salad. It gives it a delicious sweet and sour taste that works really well with the bulgur and roasted vegetables.

I always recommend reading through the ingredient list when buying pomegranate molasses. Ideally, it should only have one ingredient: Pomegranate.

Most commercial varieties are sugar og glucose based, topped up with articifial flavourings and, perhaps, a tiny bit of pomegranate. These are often too sweet. If this is all you can find, balance with a little lemon juice.

Better still, get the real single ingredient thing. The better your pomegranate molasses, the better the bulgur salad.

Delicious on its own for lunch, all you need alongside are a few green leaves. You can also have it as a main meal, either as is or with chicken. Or you can serve it alongside a few other dishes as part of a bigger meal.

The recipe serves one (greedily) for lunch, two as a side with chicken and green salad. 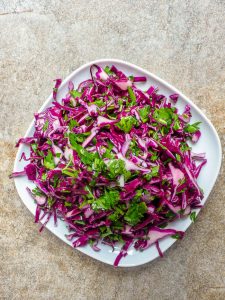 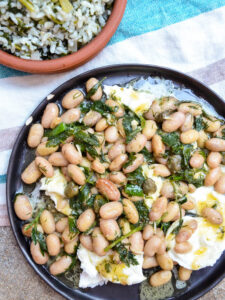