Tantuni is a classic Turkish meat wrap. Hailing from the Mediterranean city of Mersin, this iconic street food is packed with classic Turkish flavours – and you can easily replicated it in your very own kitchen.

As with any popular street food worthy of its name, the places serving tantuni are easily recognisable from a distance.

It’s the big frying pan, the tantuni tavası, that gives it away. Large, usually round, and with a characteristic hollow in the middle. Almost always, regardless of whether there are customers served or not, a chef will be hovering over it, constantly moving meat around to ensure it doesn’t burn.

The purpose of the style of pan, is to keep two cooking zones. The hollow middle is hot, for frying up the meat just before serving. The raised sides are merely warm, enough to keep the meat warm but not hot enough to fry it.

Tantuni is a popular street food of boiled, then fried, meat that’s wrapped in a thin bread alongside tomato, onions and sumac. Delicious!

Today, tantuni is mostly made with beef or lamb. However, according to Turkish food historian and restaurateur Musa Dağdeviren, the first tantunis were made from various pieces of offal. Quite when this was changed to lamb meat and then again, in many places, to beef, is not entirely clear.

What is clear, however, is that the dish originated in the Turkish Mediterranean city of Mersin. Indeed, it’s one of the food facts every Turk just knows.

Mersin lies only a short trip from Adana, another famous food city (Adana kebab, anyone?), though it holds its culinary own very well. While tantuni is the most famous local food, which has become popular across Turkey and beyond, they’ve also got several other local specialities.

How to make Mersin tantuni

If you’ve had a tantuni on the street, chances are you found it a fairly greasy affair. Super tasty, but greasy. That’s certainly been my experience.

I was therefore a little surprised to find that the more traditional recipes I found in my research actually call for lean meat. And then, to cut off any visible fat before cooking. Instead, they later add butter towards the end of cooking.

Alas, such is perhaps the nature of fast food and street food. Nothing to buff it up like a good dollop of fat.

First, the meat is cut into small pieces. You’ll see in my photos that I’ve used meat cut into fairly small cubes. That’s how I bought mine, so it was easiest for me. More traditionally, the meat is sliced thinly, much like the mentioned döner kebab, only with tantuni you start, rather than finish, the process with the slicing of the meat.

Then, the meat is boiled until tender. This sounds like a very underwhelming thing to do with good meat, but it’s important to resist skipping this point. The tenderisation process is crucial, and there will be plenty of flavour added in the final step.

Finally, you cook the meat again. This time, in fat on a tantuni tavası, or just a regular frying pan if, like me, you’re not a street food vendor.

The original fat of preference was cotton seed oil, but these days most recipes call for more easily available vegetable oils or butter. Indeed, even in Turkey cotton seed oil is very hard to come by – and expensive if you do find it. I settle, like Dağdeviren, for butter.

A couple of spices add a little extra flavour, before it’s all wrapped up in bread with a few simple salad ingredients. Some add tomato to the meat as it’s frying too, others keep it fresh for the salad.

It still sounds humble and simple, but I promise you, the flavours are anything but. You’ll be amazed to see how much flavour is built up in this Turkish wrap.

There’s really only one way to serve tantuni. Wrap it up in a lavash bread, and tuck in! Preferably with a generous glass of ayran alongside.

Of course, you’ll have some freedom in terms of what you put in your meaty bread. But frankly, if you want to keep it a Turkish tantuni, I’d suggest to keep it simple and original. If you find that’s not for you, you could always add your sauces or other salad items later. (Something I’m fairly confident that won’t be necessary.)

In Turkey, tantuni is served with slices of fresh tomato, onion, parsley and sumac. If you’re not familiar with the latter, sumac is a sour spice, made from ground sumac berries, and was used to add acidity to dishes before the lemon came along and nearly monopolised that market.

Again, this combination sounds humble, but it’s certainly not random. These are often used salad items in combination with grilled meats such as meatballs as well. They ensure that the umami laden, slightly fatty meat is balanced with something fresh and pungent. Together, it’s magic. 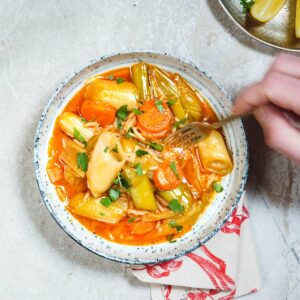