Towards the end of september, after everyone else had returned from kurban bayaramı, the sacrifice feast which this year was extended from the usual four days to a full week following the failed coup over the summer, we got into the car and went on a road trip along Turkey’s western shores. I love being able to travel places outside of the season. Not only is it cheaper – everywhere is less crowded and you can walk around virtually without disturbances.

This year, however, crowds haven’t been a very big issue in Turkey, even in season. Turkey’s sudden rise to prominence in the news in the last year has hit the tourism industry hard. I’ve seen it for myself in the streets of Eminönü, host of many of Istanbul’s main tourist attractions. The streets have been virtually empty all summer.

But this time, we were leaving Istanbul for other part’s of Turkey. And Turkey has a lot more to offer than more or less commercial seaside resorts.

Our first stop was Gallipoli, an incredibly beautiful area which also was home to one of the important battles of the first world war, and today is home to endless war cemeteries and monuments for fallen soldiers from either side, many of them having come all the way from Australia or New Zealand to fight for their colonial lords. With words that have later become iconic Mustafa Kemal Atatürk, the founder of modern day Turkey, spoke directly to the mothers of fallen enemy soldiers, promising that Turkey would take care of their sons as if they were Turkey’s own, that they wouldn’t distinguish between Johnnie and Mehmet. As far as I can see this is a promise Turks have held to this day – cemetaries and memorials for the enemy side appear as well kept and honourable as those of Turkey’s own. (I recommend reading Atatürk’s full text, it’s not very long and you can find it here.)

From Gallipoli, we crossed the narrow strait to Çanakkale, an area best known for its tomatoes, and drove on to Assos, a small, picturesque village by the beginning of a bay in the Aegean sea. Here, the contrasts were immediately transported 100 years to our current.

From the fish restaurant by the sea side, as the sun was setting, we had a beautiful view to a small island in the middle of the bay: Lesbos. The Greek island that has been the target for an unbelievable number of Syrians fleeing civil war, the vast majority of them unable to swim, perhaps even having never seen the sea before.

So close – yet impossibly far.

And in the midst of this all this beautiful nature and human suffering, I find myself thinking that these two events show what Turkey and the Turks are capable of at their best. Embracing the soldiers of the enemy as their own seasons. Virtually without blinking or any significant controversy accepting millions of Syrians fleeing civil war.

Not without problems, of course. But millions have escaped crossfire because Turkey opened its borders when other, richer countries with much more responsible for what’s happening in Syria closed their borders or congratulate themselves on their own goodness having accepted a small handful of carefully picked refugees.

And this was just the beginning of the trip – the first 12 hours. We spent five days on the road and I’ll be sharing more from the trip later. Don’t forget that you can sign up to receive notifications of all new blog posts – just enter your email address in the relevant box in the right hand column (or below the post, if you’re on mobile or a small screen).

The idea for today’s recipe came to me during a particularly long stretch of driving. When off the motor way, we were often driving through farmland – olive groves, melon farms. Food was never far away. And at some point I got thinking about lentils and aubergine, and how well they fit together in a salad. But they need a fresh element: lots of herbs, a tangy dressing. A little creamyness, perhaps a yoghurt dressing? And if I add halloumi on the side, you need nothing more for dinner.

So after returning to Istanbul, I made it. Once. Twice. And I’m sure I’ll make it many more times, because this has everything I look for in a salad: It’s filling, it’s fresh, it’s tangy. And, of course it doesn’t hurt that it looks absolute stunning. Doesn’t it?

I always cook my own lentils and see no reason to buy them canned if you have access to dried ones. It doesn’t take longer than boiling potatoes nor is it any more difficult – as with potatoes you just need to watch carefully towards the end so they don’t overcook and fall apart

Lentils are best when they still have a bite, especially in a salad, otherwise they turn mushy and not-so-delicate looking. I use beluga lentils, a dark variety that holds its shape well after cooking, but puy lentils are also good for salads. Or just use regular green lentils, but then be extra careful not to overcook as they can become a little mushy and dry if overcooked. Don’t use red lentils, they fall apart during cooking and are unsuitable for salads.

Serve this salad just as it is, or with a simple tomato and cucumber salad on the side if you like. Serves 2-3, depending on how hungry you are. 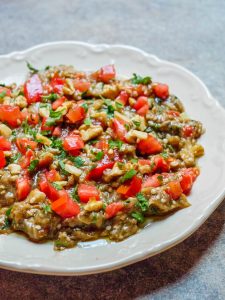