With labneh in the fridge, the possibilities truly are endless.
Vidar Bergum

Creamy labneh is requisite at any meze table. It’s also a brilliant stand-in for cream cheese – and the starting point of many a delicious meal if topped with spiced, roasted vegetables. The possibilities truly are endless!

It’s said that a Lebanese family could eat hundreds of kilos of it every year.

They bought milk in huge quantities whenever the shepherd passed by. To preserve it, they turned the milk into yoghurt, and the yoghurt into labneh. After rolling them into little balls – anything from the size of marbles to ping pong balls – they dried them up before jarring them in plenty of olive oil.

With a range of fresh dairy products being available in abundance all year round, I’m sure the number is a little lower than 300-400 kg today. Nevertheless, labneh remains an important staple in Middle Eastern cuisine.

And it is no wonder.

Labneh is one of those ingredients that tick all the boxes. Creamy. Versatile. Fresh. And super simple to make at home.

Depending on how long you strain it for, it will have the consistency of anything from cream cheese (most common) to a hard-ish fresh cheese. If going the latter way, the labneh may also be air dried for a couple of days to harden it further, and it is often stored in jars filled with olive oil.

Since yoghurt is the only flavour going into making labneh, it will acquire the taste of whatever yoghurt you choose.

It goes without saying therefore, that only the best quality yoghurt will do. Obviously, nothing can beat labneh made from home made yoghurt! But a very good shop-bought one will also do.

I do not recommend fat-free yoghurt. Indeed, labneh is typically made from fairly fatty yoghurts.

When in Norway, where sour cream is widely available, I often mix about 3/4 of yoghurt and 1/4 of sour cream for that extra bit of creaminess. In Turkey, I make sure to use a yoghurt which is fairly high in fat.

If the word “strained” makes you a little uneasy, conjuring up images of the cheesecloths you don’t have and a right old mess in the kitchen, there’s really no need to. Using a cheesecloth is indeed the traditional – and easiest – way. Many like to hang the cheesecloth in the garden, allowing the whey to nurture the soil below as it drips out.

I’ve got no garden, so I simply leave it in a cheesecloth over a colander set in a bowl. If you don’t have a cheesecloth, a clean kitchen towel or a thick coffee filter (such as that used for Chemex, which I used when I took the photos) also work really well.

Make sure that any fabrics are properly clean and free of any detergent. If they smell noticably of detergent, this may flavour your labneh!

How to use labneh

With its clean, creamy flavour and varying levels of firmness, labneh is one of the most versatile ingredients in your fridge. No wonder it’s so loved and ubiquitous in modern Middle Easter cuisine.

I often spread it on an open sandwich, topping with black pepper, cucumber & olive oil (much better than your regular cucumber cream cheese sandwich). Spooning your favourite sweet jam on top of a labneh slathered piece of bread is also delicious!

When making dessertes, I often use labneh in place of cream cheese and, on occasion, mascarpone. This works best where the dessert will be cooked. If it’s going to hang out in your fridge for a while, any mixture with uncooked labneh in it will tend to weep a little more whey than cream cheese does. Still, I’ve used it more than once in no-bake cheesecakes too.

Labneh is at its best, however, when served as a meze, alongside hummus, baba ganoush, tabbouleh and the likes. Whether simply topped with olive oil and herbs or spices (such as za’atar, above), or a more elaborate salad. Labneh loves roasted or fried vegetables and is the perfect base for a warm vegetable salad.

Personally, I rarely make my labneh harder than cream cheese. But if you do, know that you can roll them in all sorts of delicious stuff for a brilliant snack.

The recipe yields approximately 250-300 grams labneh, depending on how thick you like it and the yoghurt you start with. 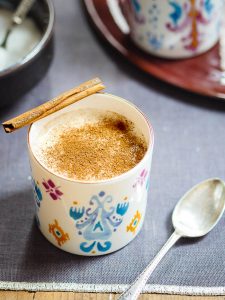 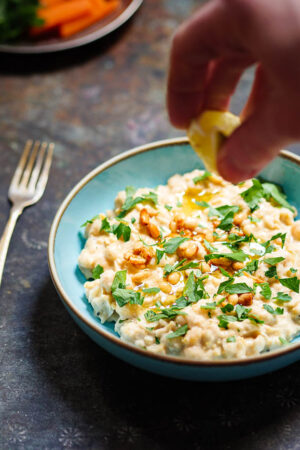