For those of us used to having green leaves with a simple dressing, seeing them swimming in yoghurt is a little unusual. But don’t be fooled, this Eastern Mediterranean style of eating them is delicious! Try this green leaves with yoghurt sauce alongside chicken or meat, or as one of several dishes at the dinner table.

Turks love yoghurt. Perhaps this is the reason why the rest of the world has adopted the Turkish word yoğurt to describe bacterially fermented milk. It’s one of the few Turkish words to make its way into most western languages.

Because in Turkey, yoghurt is appropriate at any time of day. For breakfast, for lunch, for dinner, as a snack.

Though never in the industrially produced sweetened variety I and many other non-Turks grew up with. Indeed, many Turks still make their own yoghurt at home. And if they don’t, dairy shops and supermarket aisles are flush with choice for a variety of brands and types of natural yoghurt of varying quality – some of them home made style.

Yoghurt as a “dressing”

I’ve long since taken a liking to natural yoghurt. I prefer the strained varieties, often commercially sold as greek yoghurt.

And recently I’ve taken to this method of using it. A sort of dressing for a green leaf salad.

I say “a sort of dressing”, because it’s really much more than that. It adds a richness and depth few dressings can. And, of course, there’s plenty more of it than I ever would a conventional dressing. So I call it yoghurt sauce instead. Green leaves with yoghurt sauce.

But whatever you call it, it is absolutely delicious this way!

I use purslane, a popular leaf in Turkey and much of the Middle East. Although it grows abundantly in the wild, it is considered a weed in much of the western world and so not harvested for consumption.

Purslane is very mild in flavour, similar to lamb’s lettuce. If you can’t get hold of purslane, lamb’s lettuce will work well. As will, indeed, any mild green leaves or a mixture of them.

Steeping purslane in yoghurt is the common way of serving it in Turkey, although the amounts of yoghurt used can vary considerably. Some versions actually look like they might as well be tzatziki (or cacık, the Turkish equivalent).

If you really love yoghurt, feel free to use (considerably) more than I’ve done here. The sky’s the limit, my friend.

This salad works well as a side to anything with strong flavours, such as barbecues. But really, it works with just about anything where you would otherwise consider a mild green salad. Serves 2-3 as a side. 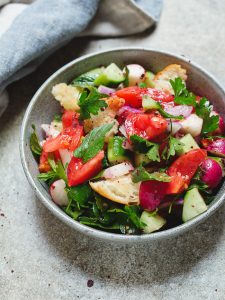