How to pack salmon with lots of flavour.
Vidar Bergum

I’m not sure if it’s the accent or the limited vocabulary that first gives me away, but whenever I encounter someone new, the following conversation usually ensues within the first minute.

— Where are you from?

A small country far north, most Turks probably know nothing about Norway. But they’ve seen the signs at the fishmongers.

Norwegian salmon must be one of the most successful branding stories of recent times.

A perfect vehicle for all sorts of flavours

It’s true that the majority of the world’s salmon is produced in Norway.

It’s not true, however, that we grow up eating salmon every day, as some appear to think. In fact, until the fairly recent advent of large scale fish farming, salmon was caught wild from the rivers and reserved for big occasions, usually simply baked as it is, cured or smoked. Flavour additions have usually been limited to dill, juniper or aquavit.

As salmon has taken the world by storm in recent years, one thing has become apparent for those of us used to the simple versions: Salmon is an incredibly versatile vehicle for flavour. It is happy to blend in with most food cultures’ already existing flavour profile, be they Asian, Pacific or Middle Eastern.

One of my favourite ways of preparing salmon is inspired by the latter, topped with a mouthwatering spice mix shouting Middle East from the rooftops.

Za’atar is a versatile spice mix consisting of a ground wild mountain herb reminiscent of thyme or oregano, toasted sesame seeds and sumac, a spice made from sour berries. Other spices may be added too, but these three spices are what makes the spice mix.

One of the reasons people rave so much about za’atar, is its versatility. It goes well with just about anything. Try it on your breakfast eggs, with roast vegetables or pulses, with chicken or on bread.

And, of course, salmon!

The combination of fragrant herbiness, umami from the sesame seeds and complex sourness from the sumac, makes it the perfect match for baked salmon.

Since salmon is an oily fish, I add a little extra sumac to offset. Delicious!

Za’atar baked salmon is an easy dish to make, perfect for a weeknight supper. All you need to do, is mix the spices with a little olive oil, spread it on top of the salmon and leave the rest to your oven.

The most important thing is to keep an eye on the oven, so the salmon is baked to perfection. In this respect, low heat is your best friend.

Since the fish comes with a ton of flavour, courtesy of the generous amounts of za’atar topping, simple goes a long way as far as sides are concerned.

While a perfectly baked salmon doesn’t need any sauce, this goes incredibly well with anything tahini. I often make a version of a Palestinian tahini sauce with onions that is often baked with (white) fish, and find it works incredibly well.

A simple dish of sautéed collard greens with a simple tahini sauce (tahini, lemon juice, olive oil, cumin) is another delicious option I learned of from Ana Sortun. She’s recently contributed a recipe to cookbook The Tahini Table, which she also shared in her Instagram Stories a few days ago.

This recipe serves four with a couple of substantial sides alongside – two if you’re looking for a high protein low carb sort of meal. I like having the salmon in one or two large pieces, but you can also use individual fillets – just remember it may shorten the cooking time a little. 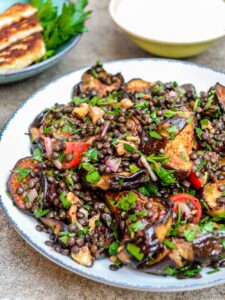 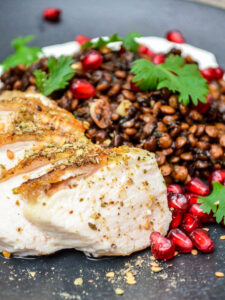