Perhaps the most delicious thing you can do to the mighty aubergine.
Vidar Bergum 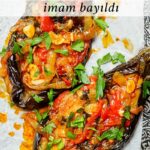 Turkish stuffed aubergines so delicious the imam who first ate them, fainted out of pure delight. Or was it in shock? Nevermind, the only thing that matters is this: Imam bayildi is perhaps the most delicious thing you can make with the mighty aubergine.

This is nothing less than one of the most famous dishes of Turkish cuisines. İmam bayıldı, literally “the imam fainted”*, likely hails from the Aegean coast. It is known across much of the former empirical lands of the Ottomans, notably also in Greece.

To the amusement of some Turks, many Greeks claim heritage to the dish. Christians of Greek heritage were a significant minority during the Ottoman empire, and there is indeed much overlap between Greek and Western Turkish cuisine. The name of the dish does bring the claim somewhat explicitly into question, however.

İmam bayıldı is part of a family of dishes of vegetables braised in copious amounts of olive oil, known in Turkey as zeytinyağlı.

What is it about this dish that knocks imams to the floor?

There are several versions of the story.

A well-known version suggests the imam fainted in delight over the delicious meal his wife had cooked for him.

Another suggests it wasn’t the taste that cause the imam to lose his consciousness, but the thought of the cost of the olive oil that had gone into making the dish.

My favourite tells the story of an imam who married the daughter of an olive oil merchant. 12 bottles of the most exquisite olive oil was gifted as part of the dowry.

On the first night, the imam asked his wife to make something delicious using some of the olive oil her father had gifted them. She went on to make a delicious dish of aubergines stuffed with onions and tomatoes. The imam loved the dish so much, he demanded it be part of dinner every single day.

And so it was. Until the thirteenth day, when suddenly no aubergines were served.

— Where are the stuffed aubergines?, the imam demanded.

His wife could only admit that she was no longer able to make it. The 12 bottles of beautiful olive oil were all empty. Nothing was left.

Upon hearing the exlusive dowry had already been spent, the imam was so shocked he fainted on the spot.

How to make Turkish stuffed aubergines

If you google imam bayıldı, the internet offers a huge number of recipes. Not all of them are equally authentic.

There are a few things that separates imam bayildi from most other stuffed aubergine dishes.

For starters, the generous amounts of olive oil used (and it should be extra virgin).

Second, the relative amounts of onions to tomato. While many modern recipes stuff the aubergines with a tomato sauce, onion is the main stuffing ingredient in traditional recipes.

Finally, the absence of any spices. As with most dishes in Western Turkish cuisine, spices more commonly used in the Middle East or Greece are not used.

It is best to use long, thin aubergines. If you can small ones, even better. That said, different types of aubergines don’t have wildly different flavour, so if a big one is all you’ve got, that’ll do too. In which case it may be worth halving the aubergine rather than stuffing it like a baguette, as the recipe below suggests.

Making imam bayıldı takes a while. The low, slow braise in plenty of olive oil is part of what makes the dish so special. Aubergines love olive oil, soaking it up and turning into the most wonderfully luscious and filling aubergine flesh once cooked.

For a simpler version, you can roast the aubergines. This also makes for a delicious imam bayildi, but if you’ve tried the low, slow braise, you’ll soon realise there’s no beating the good old methods. But don’t skimp on the olive oil!

If you like aubergines, I promise you it’s time well spent. It may look simple, but once you take a bite, it’s easy to understand why the imam may have fainted in delight.

How to serve imam bayildi

İmam bayıldı is eaten at room temperature. It can be served as one of several dishes for a meze style meal, as a vegetarian/vegan main course, or even alongside meat or fish, if you like. Plain rice or bulgur works wonderfully alongside.

I wouldn’t serve it with anything too spiced or spicy. You don’t want anything to overpower such a delicate and beautiful dish!

Serves 2-6, depending what else you offer up alongside.

*In fact, while “bayıldı” literally means fainted in Turkish, it’s also a commonly used expression for something extraordinarily delightful. Though perhaps that use of the word itself comes from the story of the imam that fainted? Who knows…