The first Turkish dish I tried is still among my favourites.
Vidar Bergum
Jump to Recipe

The dish that introduced me to the wonders of aubergine based dishes, and which I still, 15 years later, make regularly at home. Easy to make and absolutely delicious, Turkish style aubergine in tomato sauce should be in everyone’s repertoire!

There’s a lot to love about the aubergine, the undisputed queen of vegetables in the Turkish kitchen. Mezes, kebabs, stews – even stewed in syrup for dessert. Versatile and delicious as they are, it’s no wonder aubergines are ubiquitous wherever you go in Turkey.

A short story of aubergines…

Aubergines are thought to have been first cultivated and eaten in India. With travellers east and west, it quickly spread across the Asian continent, prized for its mild flavour and smooth texture.

The Turks were among the mange that took a liking to it. Today, the Turkish kitchen alone claims to have more than a hundred ways to prepare it! And hundred more variants of different recipes.

An early favourite dish with aubergine

The first Turkish aubergine dish I ate, remains one of my favourites. Aubergine in tomato sauce.

I say tomato sauce, but in fact there’s as much olive oil in here as there is tomato. Perfectly fitting for a dish considered a zeytinyağlı meze, or olive oil based meze in plain English.

As it were, this is but one of many dishes to employ the fantastic combination of aubergine, olive oil and tomato. Another is the world famous imam bayıldı (“the imam fainted” – though it’s still not clear whether the imam fainted because he loved the dish so much or because he was shocked at how much of his expensive olive oil had been used in its making).

But we’ll have to leave the light headed imam for some time later.

To many Turks, this is shakshuka!

This simple dish of aubergine in tomato sauce packs a whole lot of flavour, and is incredibly versatile to boot. It works just as well as a side as it does alongside a few other mezes.

I’ve called this soslu patlıcan, as that is the name by which I was introduced to the dish, and many people do indeed call the dish by this name. Many, though, will call it şakşuka – pronounced shakshuka – and a catch-all for fried vegetables with some sort of tomato sauce. I have a separate recipe for a more traditional Turkish-style şakşuka.

I haven’t been able to figure out the (obvious) connection to the more widely known dish of poached eggs in tomato & pepper sauce. But I’ve certainly more than once confused Turkish friends coming to visit, announcing I’ve made shakshuka for lunch, conjuring up a very different image in their minds than what I had in mind.

A few tips and tricks

Whether you call it soslu patlican, saksuka or just aubergines in tomato sauce, it is best served at room temperature. And make sure to use the best produce you can find – there are no spices to hide any off flavours here.

I’m often asked whether I peel aubergines when I use them in cooking. The skin can leave a bitter flavour or make things a little too chewy, but peeled, you’ll often find your beautiful cubes quickly move into baby food territory.

Turks (and I’m sure many other) have developed an incredible compromise to this question. They peel off half the skin of the aubergines, leaving the fruit looking like a zebra. This allows for the best of both worlds, keeping some of the texture and flavour, but without overpowering the dish.

I deviate from the classic Turkish recipes at one important point, though. The aubergine is usually fried, or even deep fried, but I find it sometimes makes the dish both heavy and oily. So I roast mine instead, making the whole affair even simpler to make in the process.

I still use plenty of olive oil though. This is a zeytinyağlı meze after all.

Serves 6-8 as a side dish or part of a meze spread.

If your tomatoes, whether fresh or canned, are a little lacking in flavour, add a little good-quality tomato paste at the same time as the garlic. 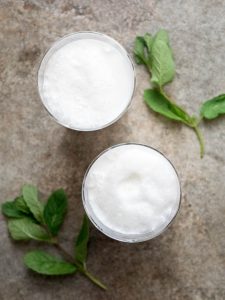 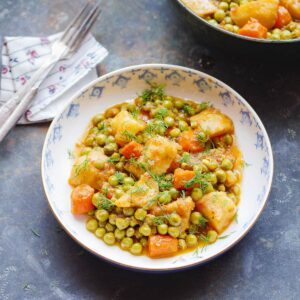 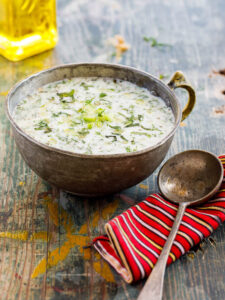